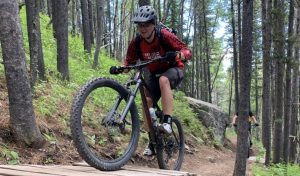 This narrative provides background about my riding history, to give readers a context for the work produced on this site.

My name’s Dan and I come from a whitewater kayaking background. I spent the bulk of my twenties chasing water up and down the Rockies and Western Canada, volunteering with kayak clubs and working part time as an instructor. This all came to a crashing end after dislocating my shoulder under a waterfall, shortly before two local kayakers lost their lives in separate events.

Although kayaking was a big part of my life I had to re-evaluate why and what I was doing. This led to mountain biking, starting in 2014.

I get out on trails whenever I can, typically 2-3 times a week. I’m not a pro and have nothing to prove. I cruise Blue and Black trails, and sometimes go off sweet jumps. Fernie is my favourite bike spot.

The following is my bike history, as background to the experiences I use for articles and reviews.

My first real mountain bike. I had been using a friend’s old Trance for a few months before, but consider the Jekyll my start to mountain biking.

The shop scrambled to offer me a deal on this bike even though it was already on sale, and ended up throwing in a dropper post at a huge discount. I was thrown off by this generosity, but after spending a couple years on this bike I learned why: the Fox 32 fork was horribly underpowered and the wheels were equally terrible. The steerer tube was an uncommon diameter which made finding a replacement stem an expensive hassle.

The marketing and robust image of the bike said “Jekyll”, but the actual performance shouted “Hyde”–twitchy and unpredictable. This so-called “enduro bike” was far from performing at an all-mountain level, and likely why the shop felt bad selling it to me.

Even as a beginner biker the Jekyll felt like a wet noodle under moderate stress, mainly because the skimpy fork was under specced and the wheels were not made for bigger riders.

I also broke two freehubs. This, combined with the weak stock rims, launched the first of many repeated episodes of wheel-related anguish. The steerer tube sparked my irritation with proprietary/ uncommon specs that make repairs needlessly expensive and/ or time consuming.

These two narratives found their flashpoints in later years. But at the time, I was a beginner biker and didn’t know any better. Helping new riders avoid these pitfalls is a major motivator behind this site.

The Reign was the real deal: carbon frame and wheels, and a plush Fox suspension all at a price point far below a similarly specced bike. This bike was way more than I needed, and still would be, but it was fun pointing it downhill and letting the suspension take care of the rest.

Over time, however, I ran into the same proprietary problems and wheel issues.

Two more blown freehubs, together with Giant hiding their specs better than the Ark of the Covenant, meant unnecessary time and frustration finding parts and keeping the bike running smoothly. When I broke the freehub on a bike trip the local shop could not find product details, and literally had to open a drawer of miscellaneous freehubs to physically match with my broken one.

When shopping for a new wheelset I was confronted with Giant’s Hellishly inexplicable choice to put a boost fork on a non boost frame. This meant I could not buy a matched wheelset without using spacers. The only alternative was to buy one boost and one non-boost wheel, which didn’t make much sense either.

I eventually laced a bomb-proof DT Swiss 350 hub into the rear rim to eliminate future freehub woes. But this also became an exercise in mental endurance as Giant did not publish their rim specs, which I needed to calculate spoke length. I eventually found the information buried in a long-forgotten bike forum.

The experience with this bike fueled my motivation to review bike specs and components with a fine toothed comb. Yet another reason to create hardtail.ca–to share these experiences in the hopes it saves others the same mind-numbing hassle.

A fantastic, all-around bike that got me fat biking in winter. Not much to say about the Farley other than more (slightly justified) freehub frustrations.

With fat bikes, due to the wider rear hubs, there’s naturally more torque on the freehub and blowing them is a relatively regular occurrence. But Trek/ my LBS were good about quickly fixing the problems. So, my gear frustrations with this bike get a free pass, as many other riders break freehubs on stock fat bike wheels.

Still a good reminder to pay attention to freehubs on Fatbikes, especially if you’re a Sasquatch Rider!

As someone who bikes for fast descents, rocketing up climbs with this full-on XC bike was a guilty pleasure.

It was purchased out of necessity in Baja Mexico when I sustained injuries after a bad kiteboarding crash days into a months long trip. Luckily, the town had a bike shop and local trails, so I bought the Epic on a whim (only one of two XL bikes available in Mexico at the time) so I had something to do for 6 weeks while subluxed ribs and a mangled rotator cuff healed between two for one margarita nights.

The bike opened my eyes to responsiveness: without a saggy suspension like the Reign, the Epic stayed on line with razor-sharp tracking. I loved it. The lack of dropper seat meant you had to be hyper-aware of weight balance on descents, or end up over the handlebars and in a cactus.

It reminded me of kayaking: once you’re on line for a series of moves, just loosen up and send it. Of course, getting offline was very unforgiving, which made nailing a line that much more rewarding.

The eureka moment was when I started breaking my enduro bike’s PR’s on descents! I couldn’t believe I was faster on Blues with this nerdy XC bike than the Reign, mainly because of tighter line choice. This became a major motivator for having an enduro style hardtail.

My main whip these days. After the previous bike and gear issues, everything except the frame, tires, fork, and seat post were switched out for bombproof components I knew would last and had the quality I now demand from all my bike gear.

This aggressive hardtail is a ton of fun–the “trail feel” makes the whole experience more rewarding and natural than a full suspension, even though descents are more physically intense.

Everything is aluminium, which is now my preference over carbon. Lighter carbon is nice, but because I’m 220 lbs and prefer beefy components, any attempts at saving weight for less durability would imply endless Sisphyian trips to the bike store for maintenance issues.

And there have been too many of those over the years!

I plan on keeping this bike for the foreseeable future, with a couple component upgrades still in the works.

If this site meets the everyday Canadian mountain biker’s needs, and helps people avoid the same bike issues I have experienced repeatedly over the years, then hardtail.ca will have done its job!