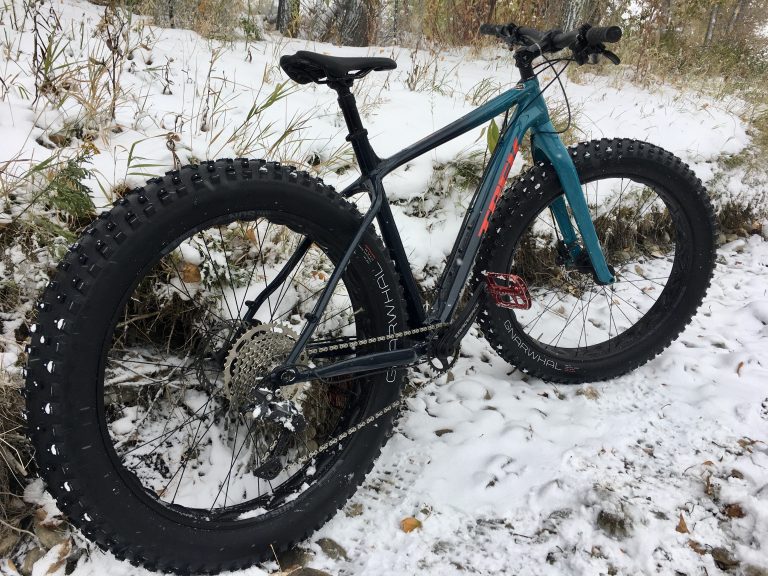 If you’re looking for an overview of the Trek Farley 5 bike with experience-backed information about performance and features, this article’s for you.

I probably do as many rides on my fat bike as my summer bike, Winters here in Canada are long. In shoulder seasons, if there’s still a chance of ice or snow, I’ll usually reach for my fat bike before my trail bike.

The Trek Farley series is, I would argue, one of the best fat bikes out there. The fact the geo hasn’t changed from my first one to my newest is an indication of how much Trek has dialed this bike in.

The Trek Farley 5 is Trek’s entry-level fat bike, although the price (just over $2000 Canadian) does make it borderline “mid-level” for most people. Plenty of manufactures make great bikes at this price point. My girlfriend has a Giant Yukon, and I know several riders with Rocky Mountain Blizzards.

I think the Trek Farley 5 is the best, most value-packed of the bunch.

In recent years, the biggest functional difference has been the front suspension on the Farley 7. Since I only fat bike in winter, there isn’t a huge need for a front suspension. Snow typically takes out all the small bumps, and a suspension fork, for me, isn’t worth the money or hassle.

The Trek Farley 5 leaves me wanting for nothing, and I’ll expect to stay on this bike for several seasons. The XC geo is ideal for snow, as the bike stays under you.

A more raked out front end may look cool, but it would make it slightly more unstable and twitchy in low traction environments.

I don’t run my fat bike tires with studs, so having the proper balance at slow speeds, and even weight distribution, is the most important geo consideration. And that’s where the Trek Farley excels. I even have ex-Olympian biker friends that swear the Farley geometry, for fat biking on snow, has no rival.

If you’re looking for an “entry” fat bike, and the Trek Farley 5 is in your budget, it should be top of mind. If you’re hesitant dropping that kind of cash on a fat bike, one important point to remember is that the items which normally wear out on bikes and are expensive to replace, like tires and bike pads, have virtually no wear in snowy/ winter conditions. I biked the Trek Farley 5 for 3 years on Bontrager tires, and they were still good as new. Same with the brake pads: since you go so much slower on snow, the brake pads don’t nearly wear out as quickly.

So, when you buy a fat bike, the maintenance costs are nowhere near a summer bike, so factor that into your budgeting.

For more info about what I just covered read my 2021 Trek Farley 5 Review and Fat Bike Studs: How to Decide if You need Them.

One of the nicest things about this bike, especially compared to something in the $1000-1500 range, is the carbon fork. This sheds a ton of weight, and makes the front end much more nimble.

Compared to an aluminum fork (or suspension fork) the carbon is extremely responsive and can quickly react if you hit a slick spot or a section of loose snow.

I won’t go into much detail here, but rear hubs on fat bikes are major weak point, because of the additional leverage generated by the wider axles. This is especially the case for Sasquatch Mountain Bikers.

To make matters worse, hubs on most entry bikes are cheap with weak freehubs, which compounds the problem.

Instead, the Trek Farley 5 comes with the same rapid drive rear hub found on Trek wheels for bikes in the $5000+ range. This is massively confidence inspiring, especially if you have a history of broken hubs.

If you haven’t had that history, rest assured you likely won’t have that problem on the Trek Farley 5 (and none of the time, money, and headaches that come with a broken hub). To learn more about wheel issues, read Sasquatch’s Mountain Bike Wheel Woes. 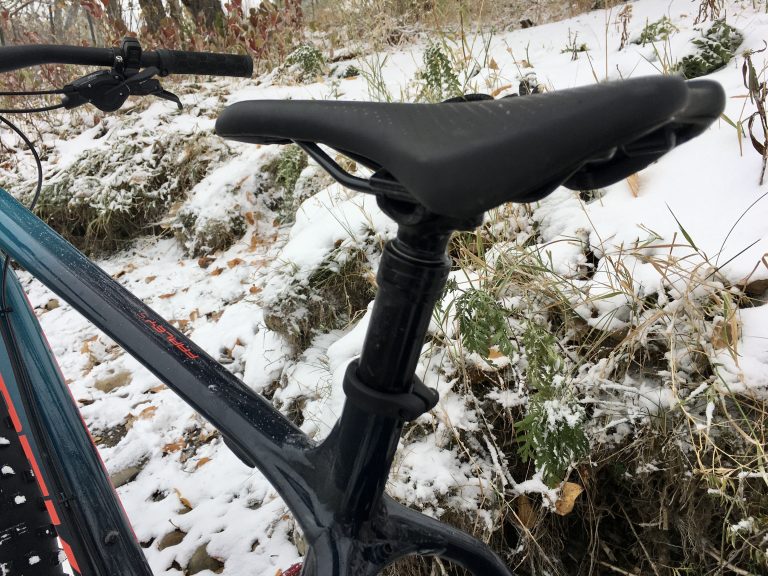 It looks like a dropper post is the new standard for the Trek Farley 5. The one on mine, the TranzX, is an entry level dropper but it gets the job done.

I’d argue a dropper is almost more of a requirement on a fat bike than a summer bike. If you have a loose powder or a slick section coming up, dropping down means you can get a foot down quicker and gain stronger control. Also, when you do fall off in deep powder, a lower seat is much easier to get back onto than one at full height.

And it makes those bobsleigh downhills way more fun.

The Trek aluminum frame, with its dialed geo and internal cable routing, looks great and is well designed. This frame hasn’t changed in my 4 years of winter fat biking. The rear dropouts are adjustable if you want to tune your geo or put a single speed wheel on. I’ve not done either, but the option is there.

Another big bonus on the Trek Farley 5, compared to bikes lower down the scale, are standard hydraulic brakes. These are much more powerful and reactive (better control) than simple mechanical brakes.

One important note: if you plan on riding the Trek Farley 5 in summer, these hydraulic brakes may not be powerful enough (the Farley 5 currently comes with SRAM Level, which are entry hydraulic brake) so that is something to keep in mind.

In winter, with slower speeds, the brakes are more than adequate.

Another nice bonus is the use of 27.5 wheels on the Trek Farley 5. This means the tires are slightly narrower than 26 wheels, but I find the grip is pretty close due to the wider circumference of the tire (bigger wheels = bigger tire contact patch).

The 27.5 roll noticeably faster, and roll over objects much easier.

Although, if you plan on winter fat biking somewhere the trails aren’t groomed, or you expect a lot of adventure riding through powder, you probably want to consider a bike with 26 wheels so you can put use wider tires with more float. 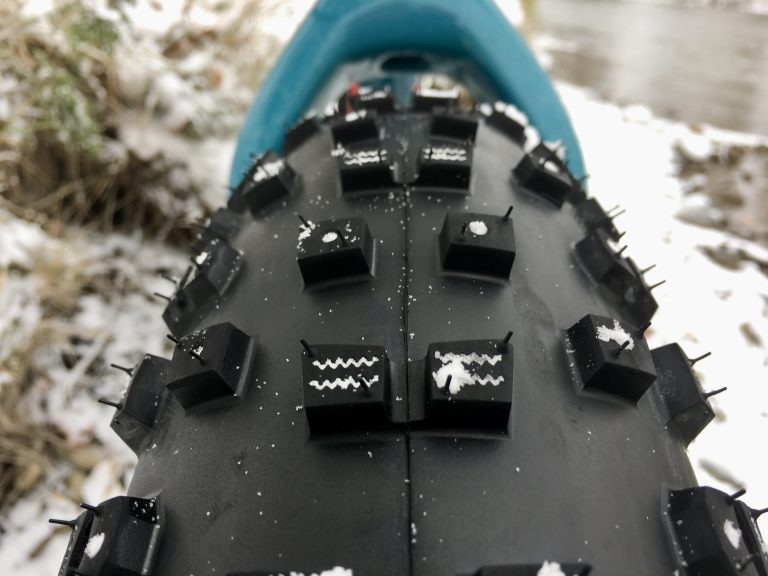 I’ve been on two Bontrager fat bike tires — the Barbegazis and the Gnarwhals — and they were both great.

I’m a big fan of the Gnarwhals, which are standard on both the Trek Farley 5 and the Farley 7. In spite of the big lugs, they still roll extremely well. When you do need that grip, the tries perform extremely well.

The tires and wheels are also tubeless ready. Tubeless conversions on fat bikes are a delicate process which I’ll be producing a future article on.

Be aware that although the rims come taped, it is highly recommended to add a couple more layers. Because fat bike wheels have several cutouts to save weight, they also make for plenty of opportunities for air to escape.

If you want to try fat biking on snow, or are ready for a proper, quality fat bike from a leading manufacturer, the Trek Farley 5 should be near the top of your list.

Geo is #1 for staying in control on snow, and the Farley 5 has that covered.

Add in the bomber rear hub, dropper post, carbon fork, 27.5 wheels, Bontrager tires, and other features, and you have one solid platform that performs through any winter condition! 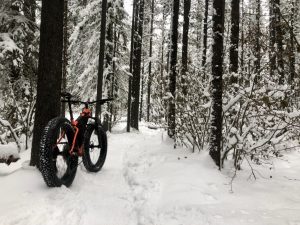 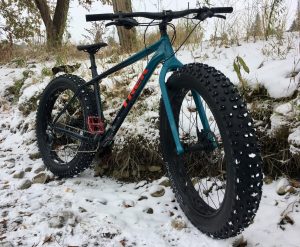 Excellent article. Your experience with the bike aligns with my personal experience renting one recently. The bike is very stable on snow. No need for a front suspension. Now, I want one…